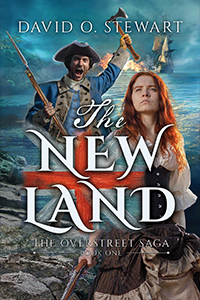 January 24, 2022 – What happens when an acclaimed author on figures from George Washington and James Madison to Aaron Burr and Andrew Johnson, turns his historical searchlight inward to his own family’s American story?  David O. Stewart does just that in his novel The New Land, Book One of the Overstreet Saga.

This is attorney-turned-author David O. Stewart’s fifth appearance on the show. I previously caught up with him to chat about his non-fiction books George Washington: The Political Rise of America’s Founding Father, Madison’s Gift: Five Partnerships that Built America, and the epic, American Emperor: Aaron Burr’s Challenge to Jefferson’s America. We also discussed The Lincoln Deception, a novel in his Fraser and Cook Historical Mysteries.

David’s new trilogy lands on the rocky shore of Broad Bay, Maine, in 1753, where we meet Johann Oberstrasse, a Hessian mercenary who’s had enough of war after being hired out to the King of England. Johann’s wife, Christiane, resolves that their son will never march in his father’s footsteps. But the New World brings old problems, challenging the rebranded Overstreet family’s longing for a peaceful life.