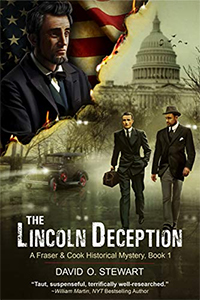 May 4, 2020 – What if a former U.S. congressman told you he had a secret about the most infamous presidential assassination, but died before revealing it? It’s a turn-of-the-century whodunit, courtesy of historian David O. Stewart‘s novel, The Lincoln Deception (A Fraser and Cook Historical Mystery)

His Holmes and Watson team features the white Dr. Jamie Fraser, and African-American former baseball player, Speedwell Cook. We previously chatted about his non-fiction books, American Emperor – Aaron Burr: The Man Who Shot Alexander Hamilton, and Madison’s Gift: Five Partnerships that Built America. Check out those interviews in our archives, visit our guest at DavidOStewart.com, and find him on Facebook.

You’ll also enjoy his post-Civil War non-fiction exploration of the man who found himself president after Lincoln’s murder: Impeached: The Trial of President Andrew Johnson and the Fight for Lincoln’s Legacy. On that topic, he was recently featured in the documentary, Going to the Devil: The Impeachment of 1868, presented by The Great Courses at Hunter College. You can enjoy the Film Screening & Discussion on YouTube.

Look for the next books in the series — The Paris Deception and The Babe Ruth Deception — coming in the summer and autumn of 2020.