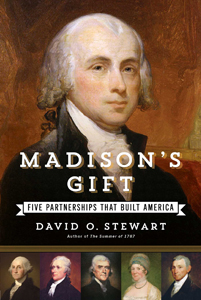 October 19, 2015 – On this episode, you’ll meet five legends — George Washington, Thomas Jefferson, Alexander Hamilton, James Monroe, and Dolley Madison — as viewed through their relationships with James Madison. Often overlooked in death as he was in life (and having the White House burned out from under him in the War of 1812 didn’t help), David O. Stewart reveals a founding father and president uniquely adept at what we today call “networking.”

The book is Madison’s Gift: Five Partnerships that Built America

David O. Stewart is also president of the Washington Independent Review of Books. His other books include: The Wilson Deception (A New Fraser and Cook Mystery)

. The Summer of 1787: The Men Who Invented the Constitution