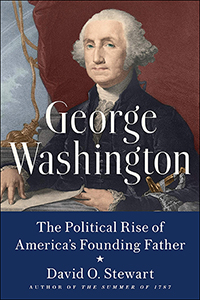 May 17, 2021 – When we think of George Washington, we see him carved onto Mount Rushmore — above all of us and certainly above anything as oily as politics. But how did he get up there? Joining us to shine new light on the warrior-statesman’s career from a mere state legislator to the single most dominant force in the creation of the United States, is David O. Stewart, who bring us  George Washington: The Political Rise of America’s Founding Father.

We previously caught up with David O. Stewart to chat about his books:

Impeached: The Trial of President Andrew Johnson and the Fight for Lincoln’s Legacy and the documentary Going to the Devil: The Impeachment of 1868, presented by The Great Courses at Hunter College.