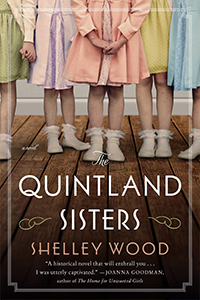 May 20, 2019 – Our time machine travels back to the Northern Ontario, Canada of 1934, to witness a unique and risky series of births. Through the eyes of fictional midwife Emma Trimpany, we’ll meet the Dionne family. They’re humble farmers eking a living out of the land, when they’re blessed with not one but five bundles of joy — the first identical quintuplets to survive birth. But the story turned dark when the Canadian government separated the infants from their parents and put them on display, as the center-ring act of a bizarre, moneymaking circus. Our guide on this journey is Shelley Wood, author of her debut novel, The Quintland Sisters. Shelley Wood’s work has appeared in The New Quarterly, Room, The Antigonish Review, Bath Flash Fiction, and The Globe and Mail. She earned the Frank McCourt prize for creative nonfiction, Freefall Magazine’s short prose contest and Causeway Lit’s creative nonfiction prize. Visit our guest at ShelleyWood.ca, follow her @ShelleyWood2 on Twitter, or toss her a like at Facebook.com/ShelleyWoodAuthor.   Podcast: Download (Duration: 57:17 — 131.1MB)Subscribe: Apple Podcasts | Google Podcasts | RSS | More 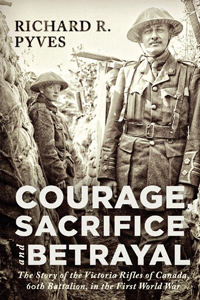 July 30, 2018 – Our time machine travels back to the Western Front of the Great War, and enlists with the 60th Battalion of the Canadian Expeditionary Force, which captured the villages of Vimy and Petit Vimy, in the pivotal battle for Vimy Ridge. Author Rick Pyves contacted 2,500 living relatives of the soldiers through Ancestry, uncovering 86 personal recollections and letters as well as over 200 photos for Courage, Sacrifice and Betrayal – The Story of the Victoria Rifles of Canada, 60th Battalion in the First World War.  One of those relatives is our own resident genealogist, Catherine, who offers her research services through HistoryAuthor.com/FamilyHistory. Her grandfather’s first cousin, Private Charles Henry Mainwaring, gave his life in the 60th Battalion at only 20 years old. Rick Pyves is an avid historian and a genealogist who, like Catherine, also hails from Canada. His first book — Night Madness: A Rear Gunner’s Story of Love, Courage, and Hope in World War II — weaves his father’s tale into a touching love story in one man’s very personal war. Visit RichardPyves.com or follow @RichardPyves on Twitter for more on this view of the First World War War from the nation Winston Churchill… 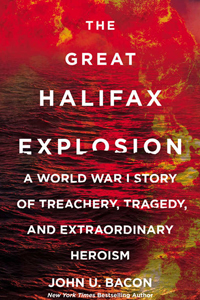 April 23, 2018 – Our time machine travels back 100 years, to witness the split-second explosion that blew a chunk of Halifax, Nova Scotia off the map. On December 6, 1917, this key city in supplying the Allies in the Great War, suffered the largest man-made explosion prior to the bombs that ended World War Two — something that caught the attention of physicist Robert Oppenheimer, the “father of the atomic bomb.” On the shore in Canada to witness the collision in the harbor is John U. Bacon, author of The Great Halifax Explosion: A World War I Story of Treachery, Tragedy, and Extraordinary Heroism. John U. Bacon teaches at Northwestern University’s Medill School of Journalism and the University of Michigan. He’s written five New York Times bestsellers, including Three and Out, Fourth and Long, and, Endzone. You can catch him often on NPR and national TV, as well as JohnUBacon.com, @JohnUBacon on Twitter, or Facebook.com/JohnUBaconAuthor.         Podcast: Download (Duration: 1:04:27 — 147.5MB)Subscribe: Apple Podcasts | Google Podcasts | RSS | More 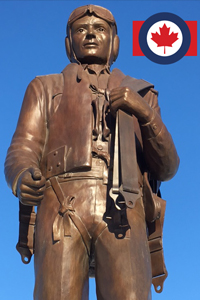 October 9, 2017 – This week, our time machine flies up to the Great White North — the very heart of Canada — for a road trip to Brandon, Manitoba’s Commonwealth Air Training Plan Museum, a national historic site dedicated to the memory of the men who fought and died in the skies during the Second World War. It’s the only museum of its kind in the world, marking where crews from Australia, New Zealand, England and Canada trained. Prime Minister Winston Churchill called Canada “the Great Dominion,” and said the Commonwealth Air Training Plan was its greatest contribution to Allied victory over the Axis powers, specifically Germany and Italy in the European Theater. Our guest is Museum president John McNarry. Visit the museum at AirMuseum.ca, join their Facebook group, or find them @CATPM_Brandon on Twitter.   Podcast: Download (Duration: 53:44 — 123.0MB)Subscribe: Apple Podcasts | Google Podcasts | RSS | More