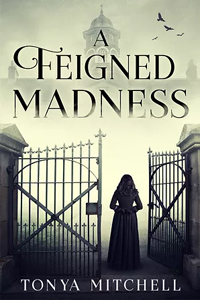 October 19, 2020 – In 1887, the New York World newspaper laughed off 23-year-old Elizabeth Cochrane’s dreams of being a reporter. Today, she’s a New York City legend, known to history by the pen name Nellie Bly. But to sew up that dream job, Nellie had to go undercover in the closest thing Gilded Age Gotham had to hell: The asylums of Blackwell’s Island on the East River.

Tonya Mitchell brings us a meticulously researched, fictionalized account of Nellie’s mission in her debut novel, A Feigned Madness. It follows Nellie’s quest to expose the corrupt officials running the asylum, and blow up the conventional wisdom that women just can’t hack it in a newsroom.

You’ve seen Tonya Mitchell’s award-winning fiction in the Copperfield Review, Words Undone, the Front Porch Review, and various anthologies. She’s also earned a BA from Indiana University in the field Nellie Bly pioneered, journalism, and describes herself as obsessed with the Victorian Era, as we’ll see in the rich, transportive detail of her fiction.

You can learn more about the fact behind the fiction of this episode, in our interview with Stacy Horn about her book, Damnation Island: Poor, Sick, Mad, and Criminal in 19th-Century New York.