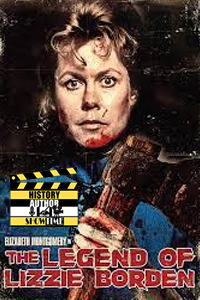 October 24, 2022 – Something special this week for the season of pumpkins, ghosts, and Candy Corn: A YouTube feature on what Hollywood gets right and wrong about yesterday called History Author Showtime.

It’s a video breakdown of the 1975 movie, “The Legend of Lizzie Borden,” starring Elizabeth Montgomery, who you may remember as Samantha Stevens from “Bewitched.” I often ask authors what they think of the film or TV portrayals of the past, and for this week, I pulled some soundbites from Cara Robertson, who I interviewed about her book, “The Trial of Lizzie Borden.”

“The Legend of Lizzie Borden” was her favorite portrayal of the tried-but-not-convicted alleged murderess. I’ve previously published Showtime breakdowns of AMC’s “The Americans,” which featured former KGB agent Jack Barsky, who I interviewed about his book, “Deep Under Cover. My Secret Life & tangled Allegiances as a KGB Spy in America.”

I also covered “The Dummy,” a 1962 episode of The Twilight Zone. Anne Serling, author of “As I Knew Him: My Dad Rod Serling” had a surprising and amusing recollection of the infamous ventriloquist dummy used in show that I just felt deserved to be highlighted.

Thank you for subscribing at YouTube.com/@historyauthorshow to support more time travel adventures.