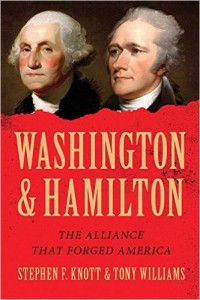 December 28, 2015 – Today, we’re joined by Stephen F. Knott, who along with co-author Tony Williams brings us Washington & Hamilton: The Alliance that Forged America

From the early days of the Revolutionary War on the hills of Rutgers University — where Hamilton’s artillery covered Washington’s retreat from New York City — to victory at Yorktown, the Continental Congress and the first presidential administration, Washington and Hamilton had an often difficult, father-son relationship. But one that left a legacy that sustains America, even now into the 21st Century.

Mr. Knott is a Professor of National Security Affairs at the United States Naval War College in Newport, RI. You can follow him on Twitter @Publius57, and find his co-author Tony Williams @TWilliamsAuthor. Mr. Williams is a history teacher at the Bill of Rights Institute, as well as the Washington, Jefferson, and Madison Institute and the author of four previous books.