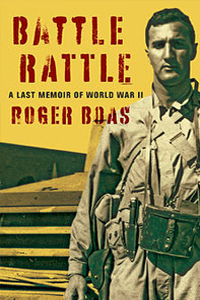 July 11, 2016 – Today, we travel back in time to World War Two, and hear from a veteran who served on the front lines. Our guest is Roger Boas, and his book is Battle Rattle: A Last Memoir of World War II

. It focuses not only on the fighting, but the scars it left on the inside.

Roger Boas was born in San Francisco, 1921, so he’s just five years from celebrating his centennial. That long life — denied so many of his generation — has given him time to reflect on the meaning of his four years in uniform, including eleven months fighting in Europe as a field artillery forward observer with Gen. George S. Patton’s Fourth Armored Division.

For his service, Roger Boas earned both a Silver Star and a Bronze Star. And raised a Christian Scientist but of Jewish ancestry, he was among the first American soldiers to find and enter a Nazi concentration camp. Experiencing so much brutality left scars on the young Roger Boas. The result, is what we today call Post-Traumatic Stress Disorder (PTSD). But in the Second World War they called it, “battle rattle.”

Update: Lt. Roger Boas passed away a few months after our interview at the age of 95. It was an honor to meet him, and to play a small role in sharing his story. He is home at last, with no more nightmares of the war’s horrors, which plagued him up to the end of his long life. Rest in peace, sir.