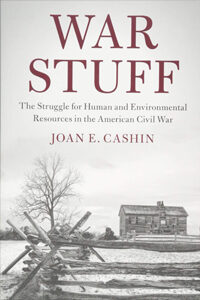 March 11, 2019 – Our time machine travels back to the American Civil War for a look at the toll paid by civilians and the countryside trampled under the boots, hooves and wagon wheels of rampaging armies. We’re all familiar with the devastation wrought on soldiers, but after a century-and-a-half, those sacrifices have become romanticized — and battlefields once soaked with blood and littered with corpses, are now pristine national parks.

Here to catalog the loss of ordinary citizens who didn’t wear Confederate butternut or Union blue, is Dr. Joan Cashin, noted historian and author of the first full environmental history of the conflict. It’s titled War Stuff: The Struggle for Human and Environmental Resources in the American Civil War

. Joan earned a B.A. from The American University and a Ph.D. from Harvard. Today, she is a Professor of History at the Ohio State University in addition to her duties as editor of Our Common Affairs: Texts from Women in the Old South.

Her previous books include A Family Venture: Men and Women on the Southern Frontier

and First lady of the Confederacy: Varina Davis’s Civil War

. She also edited the book War Matters: Material Culture in the Civil War Era. You can follow our guest on Twitter @JoanECashin or check out her bio page at the Ohio State University.