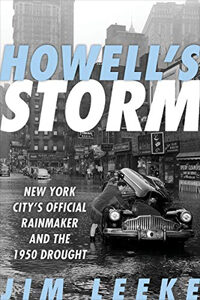 April 22, 2019 – We welcome a familiar face back into our time machine, and travel back to a parched New York City, suffering from a drought that began in a sweltering 1949, and stretched into 1950 with no end in sight. Desperate for rain, Mayor William O’Dwyer hired Dr. Wallace E. Howell, a handsome, 35-year-old meteorologist out of Harvard who approached weather modification as a cool-headed scientist, not a Music Man-style huckster.

We meet this headline-making man with his head literally in the clouds in Howell’s Storm: New York City’s Official Rainmaker and the 1950 Drought

, by author Jim Leeke. Jim is a contributor to the Society for American Baseball Research Baseball Biography Project, as well as the writer or editor of several books on U.S. and military history.

We chatted previously with Jim about his books, Nine Innings for the King: The Day Wartime London Stopped for Baseball, July 4, 1918, and, From the Dugouts to the Trenches: Baseball During the Great War, as well as his Civil War novel for young adults, Matty Boy. A string of appearances, which makes Jim our first four-peat guest.