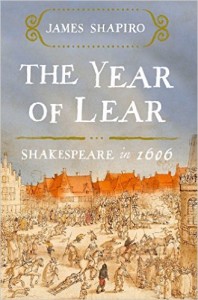 On this episode, we visit the theaters, throne rooms and taverns of London 400 years ago, as seen through the eyes of William Shakespeare. History Author Show correspondent Stephen Bedford met our guide to Jacobian London in the shadow of the immortal bard’s statue in Central Park. He is renowned Shakespeare scholar James Shapiro, professor of English of Columbia University.

His book is The Year of Lear: Shakespeare in 1606

. That was a particularly chaotic year in England with King James’ ascension and the foiling of the Gunpowder Plot. But this atmosphere of crisis inspired Shakespeare, and he went on to produce three of his greatest tragedies that year: King Lear, Macbeth, Antony and Cleopatra.

Professor Shapiro is historical adviser at New York City’s Public Theater, Governor of the Folger Shakespeare Library, and frequent BBC commentator. He is also the author of Contested Will: Who Wrote Shakespeare

? You can find him at JamesShapiro.net.