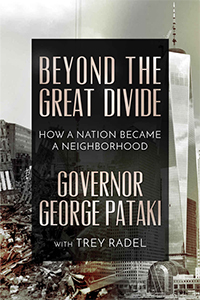 Sep 7, 2020 – On September 11, 2001, Al-Qaeda sought to break the American union, aiming at what they saw as fatal flaws in our democratic system. Two decades later, the man who was governor of the Empire State on that day of infamy dares to ask, “Did the terrorists win?” In this episode, the 53rd governor of New York, George E. Pataki, joins us to discuss Beyond the Great Divide: How a Nation Became a Neighborhood, co-authored with former congressman Trey Radel of Florida.

Governor Pataki spent twelve years at the helm of the Empire State and delivered the lone remarks at Ground Zero on the one-year commemoration of the attacks, choosing to recite the Gettysburg Address. He discusses how 2020 America, like Lincoln’s, faces domestic divisions that would’ve seemed impossible as the rubble of the Twin Towers smoldered.

Then as now we find ourselves asking: Can this nation conceived in liberty and dedicated to equality, long endure? This former presidential candidate, state legislator, mayor of Peekskill, and three-term Republican governor of a deep-blue state, shares optimistic solutions for reuniting that wartime neighborhood in an era of domestic division and partisan strife that we all have a civic duty to combat.

You can learn more about binding up the nation’s wounds at GeorgePatakiCenter.com or @GovernorPataki on Twitter.