Deborah Cohen – Last Call at the Hotel Imperial: The Reporters Who Took on a World at War 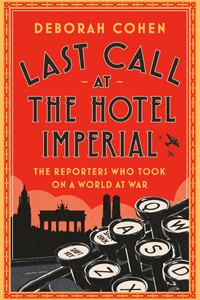 April 18, 2022 – If a group of World War Two-era journalists invited you out for drinks, ready to open up about their interviews with everyone from Gandhi and Neru to Mussolini and Hitler, what would say? Readers get that opportunity with Deborah Cohen who brings us Last Call at the Hotel Imperial: The Reporters Who Took on a World at War.

In this episode, our time machine welcomes aboard journalists John Gunther, H. R. Knickerbocker, Vincent Sheean, and Dorothy Thompson, who have do their job before and during the war, confronting the likes of Hitler and Mussolini, but also isolationist forces who think dictators might not be so bad.

Deborah Cohen is the author of The War Come Home: Disabled Veterans in Britain and Germany, 1914-1939, Household Gods: The British and Their Possessions, and Family Secrets. She is also the Richard W. Leopold Professor of History at Northwestern University, focusing on modern Europe. Visit her at DeborahCohen.com or @DeborahACohen on Twitter.

Special thanks to Cara Robertson for sending this great book our way. In our archives, you can listen to Cara chatting about her book The Trial of Lizzie Borden: A True Story.