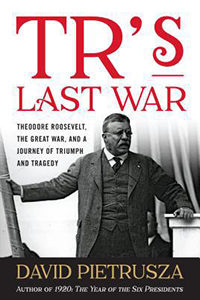 October 8, 2018 – Our time machine travels back to America’s experience in the Great War through the eyes of former president and hero of the Spanish-American War Theodore Roosevelt, whose four sons suited up to fight over there. Leading us through basic training is David Pietrusza, author of TR’s Last War: Theodore Roosevelt, The Great War, and a Journey of Triumph and Tragedy

In David Pietrusza’s book, we get a fleshed-out picture of the former Rough Rider — older, suffering in the aftermath of his ill-fated Brazilian expedition, and blind in one eye, but still scrapping for a fight and taking on President Woodrow Wilson.

You have seen David Pietrusza’s work everywhere great history is found. He has written or edited a footlocker full of best-selling, award-winning books, including those on the pivotal presidential election years 1920, 1932, 1948, 1960. He’s been called one “of the best historians in the United States,” “one of the great political historians of all time,” and “the undisputed champion of chronicling American Presidential campaigns.”