David Pietrusza – 1920: The Year of the Six Presidents 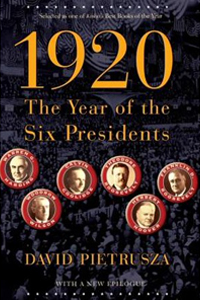 February 10, 2020 – Recorded live at the FDR Presidential Library and Museum in Hyde Park, New York, our time machine travels back to the end of the Great War and the dawn of Prohibition. Jazz Age America picks a president, with flappers in all 48 states casting ballots for the first time as a half dozen once and future presidents compete for victory.

Returning to share his historical wisdom is David Pietrusza, who brings us, 1920: The Year of the Six Presidents. We last chatted with the award-winning historian about his books TR’s Last War: Theodore Roosevelt, the Great War, and a Journey of Triumph and Tragedy, and, Rothstein: The Life, Times, and Murder of the Criminal Genius Who Fixed the 1919 World Series.

David Pietrusza has written or edited a stack of best-selling, award-winning books, including those on pivotal presidential election years 1932, 1948, and 1960.  He’s appeared everywhere from C-SPAN and the History Channel, to ESPN and Fox Sports Channel, and AMC’s Making of the Mob: New York. It’s easy to see why he’s been called one “one of the great political historians … of all time.”