Candice Millard – Hero of the Empire: The Boer War, a Daring Escape, and the Making of Winston Churchill 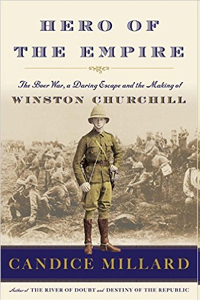 September 26, 2016 – This week, our time machine spins us back to Boer War in the twilight of the 19th Century, when the republics that preceded today’s South Africa fought the British Empire over gold and diamonds. While there, we’ll see a familiar face from World War Two forty years later. The name Sir Winston Leonard Spencer Churchill invokes the balding, cigar-chomping, British bulldog who stared down Hitler across the English Channel. So it’s easy to forget that he was a soldier once, and young.

Distinguished author Candice Millard introduces us to this Churchill as he puts his foot on the first rung of the ladder to greatness in Hero of the Empire: The Boer War, a Daring Escape, and the Making of Winston Churchill

. Her previous books are best-sellers The River of Doubt: Theodore Roosevelt’s Darkest Journey, and Destiny of the Republic: A Tale of Madness, Medicine and the Murder of a President, covering the man the President James A. Garfield National Historic Site described in our very first episode as, “The greatest president we never had.”

If you’re fascinated by Churchill, catch our interview with Jonathan Sandys, Churchill’s great-grandson and the host of Churchill Chat. His book is God & Churchill: How the Great Leader’s Sense of Divine Destiny Changed His Troubled World and Offers Hope for Ours

. You can also listen to our discussion with Simon Read, author of Winston Churchill Reporting: Adventures of a Young War Correspondent