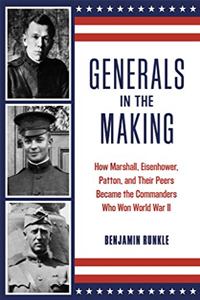 June 1, 2020 – Meet the commanders who led America to Victory in mankind’s most terrible conflict before they had stars on their shoulders. Our guide on this journey is 82nd Airborne veteran and paratrooper Benjamin Runkle. He brings us Generals in the Making: How Marshall, Eisenhower, Patton, and Their Peers Became the Commanders Who Won World War II

It’s the first comprehensive history of these men during the interwar years, when the already lean U.S. Armed Forces found themselves squeezed even further by the Great Depression and isolationist sentiment, all while facing

strains on marriages, bouts with the bottle, the deaths of wives or children, backwater postings, and stagnant chances for promotion.

In addition to his service, for which he earned a Bronze Star during Operation Iraqi Freedom, Benjamin Runkle has worked as a presidential speechwriter, Department of Defense official, director at the National Security Council, and professional staff member on the House Armed Services Committee. He is currently a senior policy fellow with Artis International and adjunct lecturer in Johns Hopkins University’s Global Security Program. He holds a PhD from Harvard.

Check out Dr. Runkle’s previous book, Wanted Dead or Alive: Manhunts from Geronimo to Bin Laden. You can find more of his work in major newspapers and periodicals, sharing his insights as America navigates the dangers of the 21st Century world. Also in this episode, we compared the wilderness years of generals like Ike, Patton, Douglas MacArthur, Matthew Ridgway, and Omar Bradley to Ulysses S. Grant’s similar struggles between the Mexican and Civil Wars.

Offering up a question on those parallels was Donald L. Miller, who recently joined us to discuss his book, Vicksburg: Grant’s Campaign That Broke the Confederacy.