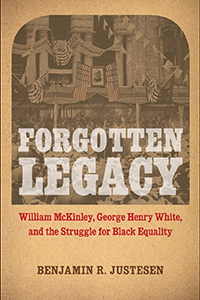 February 15, 2021 – There has been no more noble fight in all of history than the one guaranteeing equal rights for formerly enslaved people.

So how did America forget the Black congressman and a Civil War veteran president to ensure that all those Union soldiers hadn’t died in vain — and more importantly, that the words on those Reconstruction Era amendments to the Constitution guaranteeing rights to the freedmen, weren’t just ink on the page, laughed at by marauding lynch mobs?

In this episode, we meet this overlooked odd couple with Benjamin R. Justesen who brings us Forgotten Legacy: William McKinley, George Henry White, and the Struggle for Black Equality. Justesen writes, “William McKinley’s role as a sincere friend and benefactor of African-Americans may be one of the best-kept secrets in American political history.” He also introduces us to the inspiring Congressman White, whose skill as an orator — and later as the founder of Whitesboro, New Jersey — is the stuff of legend.

Ben Justesen is a former journalist, teacher, and U.S. Foreign Service Officer whose previous book is George Henry White: An Even Chance in the Race of Life.