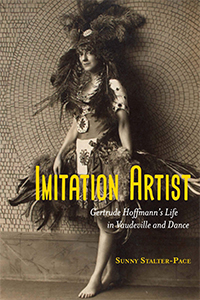 July 27, 2020 – Video killed the radio star, and the talkies killed Vaudeville, but some legends adapt to changing times. In this episode, we meet one such innovator, who made a series of leaps from New York City’s Hippodrome to Hollywood, with many entertaining stops and in between.

Born in the San Francisco of 1883 as Katherine Gertrude Hay, Gertrude Hoffman broke into show business as a mimic, copying highbrow performances from Europe and popularizing them for a broader American audience. She started as a pantomime ballet girl in the Gay Nineties, grew up with Vaudeville, and later worked as a choreographer and teacher, living well into the 1960’s.

Joining us in our time machine is the Hargis associate professor of American literature at Auburn University, Sunny Stalter-Pace, who brings us, Imitation Artist: Gertrude Hoffmann’s Life in Vaudeville and Dance

. Find our guest online at SunnyStalterPace.com or on Twitter @SLStalter.