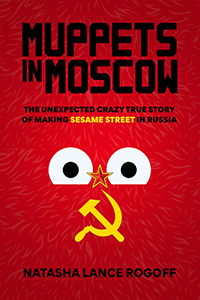 December 19, 2022 – How did Kermit the Frog, Big Bird, and the rest of the Sesame Street expand their neighborhood to Moscow after the collapse of the USSR? In this episode, we meet the woman who adapted a beloved American TV show for an audience newly freed from behind the Iron Curtain.

TV producer and filmmaker Natasha Lance Rogoff who brings us, “Muppets in Moscow: The Unexpected Crazy True Story of Making Sesame Street in Russia.” It’s the true story of the Soviet Union tearing down its walls and a reborn Russia opening its doors to the best the West had to offer — despite assassinations, armed attacks, and even the kidnapping of Elmo at the barrel of AK-47s.

Visit her at NatashaLanceRogoff.com, where you can navigate through to her social media accounts on all the major platforms, including @LanceRogoff on Twitter.