Jeffrey Frank – The Trials of Harry S. Truman: The Extraordinary Presidency of An Ordinary Man 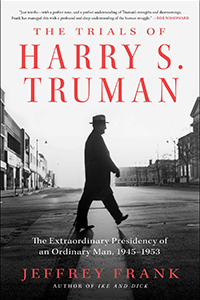 August 22, 2022 – What if you were a Midwestern haberdasher-turned-senator, who served just three months as vice president, before finding yourself thrust into the Big Chair, charged with winning World War II?

In this episode, our time machine welcomes aboard journalist Jeffrey Frank who brings us, The Trials of Harry S. Truman: The Extraordinary Presidency of An Ordinary Man, 1945-1953.

Jeffrey Frank is the best-selling author Ike and Dick: Portrait of a Strange Political Marriage. He has published four novels, among them the Washington Trilogy — The Columnist, Bad Publicity, and Trudy Hopedale — and is the coauthor, with Diana Crone Frank, of The Stories of Hans Christian Andersen: A New Translation from the Danish, which won the 2014 Hans Christian Andersen Prize.

He was a senior editor at the New Yorker, the deputy editor of The Washington Post’s Outlook section and is now a contributor to major publications nationwide. Visit him at JeffreyFrank.com, or on Facebook and @JeffreyAFrank on Twitter.

Special thanks to Sally Mott Freeman for offering her insights in a video question for this interview. You can check out our conversation about her excellent book, The Jersey Brothers: A Missing Naval Officer in the Pacific and His Family’s Quest to Bring Him Home.